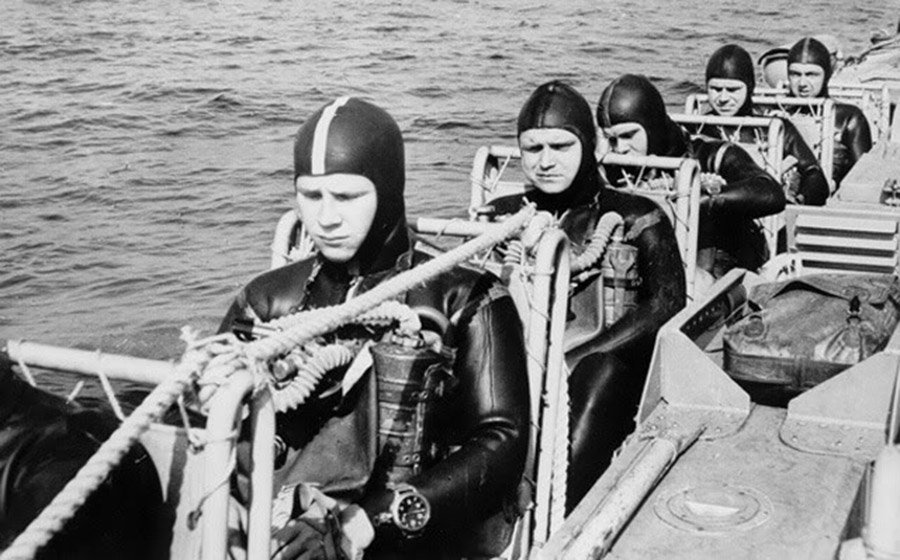 Agat Diver Watch: A hefty name for the heftiest of diver watches

Although the manned torpedo and water resistant watches had been around since early in the 19th century, a key moment for the subject of diver watches is 19 December 1941.

It is when an Italian Navy diver unit attacked the port of Alexandria with three maiale (Human torpedo). The battleships HMS Valiant and Queen Elisabeth and an 8,000-ton tanker were sunk in shallow water. With this very successful attack by the Italian maiale pilots on the British warships the (sabotage) divers' watch was established. The divers used a depth meter, a compass and a wristwatch to navigate and coordinate. The Italian navy used a Panerai made for them by Rolex.

The same in unbranded guise was used by the German Kampfschwimmers. Unamused the British marine had their own Longines engined ones made by a London watchmaker for the Chariot drivers. All of the above followed traditional watchmaking in the shape of a case with a front window and rear lid made watertight.

The Soviets took a different design path for the dives. As Russia had no watchmaking industry of its own, in 1927 the strategic decision was taken to set up a factory for chronometers and chronographs.

In 1931 the First Moscow Watch Company started producing for the military. Autumn 1941 the factory was moved far into the motherland, divided over two locations, to safeguard it from the advancing German troops. One part went to Chistopol to become the Vostok factory.

The other went to the military industrial complex of Zlatoust and his new factory, the current Zlatoust (Agat) Watch Factory, where the military diver watch would be produced. During WW2, the Agat factory produced: 127,000 aviation clocks, 77,000 tank clocks = 73% of soviet tanks and 45,000 artillery clocks. That diver's watch was developed along the same thinking lines of a diving helmet; it was a single piece case into which the movement was mounted from the front, with a sturdy ring screwing down the crystal on the rubber seal.

The model was known as the 191 and had a beefed up version of the Dueber-Hampden pocket watch caliber inside. The 191 was made exclusively for the military. It remained property of the state and was issued for a job only. It was 100% a dive tool and unavailable for sale. As such it had no branding, no markings whatsoever save for a serial number on the back.

It remained in production unchanged until 1974 when the last batch was made. In all some 6,000 of the Agat diver watch had been made.

It only knew some minor detail differences over time. The earliest ones have minute marker, which disappeared at the end of the fifties. The end of the fifties also saw the use of radium for the luminescent paint disappear. After 1974 the Agat factory made no diver watches. Ditto the modern marketing created Invicta' Russian Diver' of traditional watch concept about thus nothing more needs be written.

The real things had however found their way to the watch collectors and became quite iconic. During his period as the Governor of California Arnold Schwarzenegger appeared frequently in public while wearing one, including in the "big knife" video on youtube. These beasts are often dubbed the "Russian Panerai" and it's easy to see why.

In response to repeated requests the Zlatoust (Agat) Watch Factory produced a batch of 20 sixties model cases with flat profile bezel and ditto bottom in the summer of 2010: Time seems to have stood still at the Zlatoust (Agat) Watch Factory. Being there is like being in a time-warp. Similar factories, perhaps, can only be seen now in old Soviet documentaries from the ‘60s and ‘70s. Amazingly, despite the old machinery, workers at the watch factory manage to produce a few timeless pieces, time machines. Russian divers’ watches have been hogged by collectors worldwide for several decades now, but the real deal is being made again in the city of Zlatoust. “We produced these watches until 1974 for the Soviet Navy,” a watchmaker, Nikolay Moskvichev, told Russia Today. “Then we stopped, because there was no need for them, but now, suddenly, they have become popular. So, we have renewed production, but in a very small capacity.” Russia Today, 01 April, 2010

This was when the Agat Diver Watch reborn. Over the course of 2011, apart from the original 60mm case, 2 more designs were launched, a 53mm case and a 46mm case. Both have the automatic version of the 2409 movement, the 2415, ticking inside. Unofficial word from the factory is that the 46mm is the most difficult to make and at around the same price as the 53mm gives less profit since the market expects a lower price as the diameter decreases.

Although not historically identical, the Vostok 2409/2415 movement is in a way more befitting than the original movement. The 2409/2415 is an original Soviet design whereas the original caliber was heavily based on the American Dueber-Hampden pocket watch movement.

As of 2014, the Zlatoust (Agat) Watch Factory produces some 300 diver watches per annum, all models together. They are all made on the same machinery as the vintage originals.